In between various software projects, working on the new site, and trying to complete a Left 4 Dead campaign on Expert with only the AI’s to help me, I’ve been writing blog posts about classic Macintosh systems. But I haven’t been publishing them because I never got around to finishing the new site.

Until now that is.

So over the following weeks I will post one article a week about classic Macs until all of them are online.

How did this start? Last summer (2015) I had a bit of nostalgia for old Macs. I’m not sure what triggered it, but I ended up spending a night surfing the web reading about machines from the 1990’s and early 2000’s. I also dusted off a PowerBook G3 PDQ that I had purchased off eBay three years prior but never really played with.

This might have all ended with a few nights of web surfing and playing classic games on the PDQ except for one small thing: a pair of articles at LowEndMac.com. Low End Mac is one of the most popular sites covering Macintosh systems which are…well…no longer current. They have a treasure trove of articles, specs, and tips. They also produce new content on a regular basis.

Those two specific articles stuck in my head because I knew some, if not most of the technical information they contained was false. But I didn’t want to write a rebuttal without being sure. And that led me down a path of old books, tech notes, source code, and memories of writing code for Power Macs running System 7.5 – Mac OS 9. The machines I learned to code on.

I wrote the rebuttal. I also restored a Mac I thought had been lost to time. Found a Mac at a recycling center nearly identical to one I spent hours working on professionally. Hunted for abandoned Macs at local garage sales. And purchased Macs off eBay I that I remember wanting back when they were new.

Some of the machines I’ve restored have already found new homes. Others I will keep. I’m still looking for old Macs to restore and old software to archive for posterity. Maybe something I’ve written along the way will help others restore and enjoy the classics. 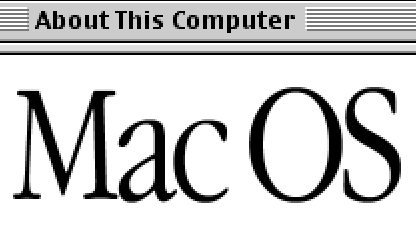